American small towns share a common hub. It’s where patrons tell stories, share local news and conspire to resolve the world’s problems. The wisdom and laughter that emanates from these local institutions is only surpassed by the fact everyone leaves looking much better than when they arrived.

What these community hotspots? They’re your local haircutter.

The guy who owns my local haircutter shop is a go between for Tommy Feehan and me. Our haircutter knows just about everyone worth knowing in our Philadelphia suburb. Feehan Plumbing has been serving this region for decades.

“Have you seen Tommy around?” I’d ask. And the haircutter’s, “Yep, he was in here last Saturday,” reply confirms his go between role as he conveys messages and greetings between customers.

Feehan’s local reputation goes beyond the walls of our haircutter’s building. He’s known as a kind and positive man who has mentored local youngsters in more than just plumbing and heating.

“I graduated high school in 1969 and I knew that I wasn’t cut out for a university,” says Feehan. “My father was plumber, so I helped him and also attended vocational school. Being mentored by my father was a blessing. At 25, I was a master plumber and this achievement was bittersweet.” Feehan explains.

My father was plumber, so I helped him and also attended vocational school. Being mentored by my father was a blessing.

His father passed away at this time and Feehan was on his own.

His dad’s mentoring included technical and relationship advice about serving the community. Similarly, Feehan’s grandfather mentored his dad. As a third generation service company, mentoring has been and still is a key asset.

“In the 1930s, during the great depression, many people just didn’t have money. My grandfather and father did some residential work for free. Neighbors needed help.” Feehan says. “Helping people is what service companies do.”

The 1929 stock market crash, which resulted in the great depression, had a negative impact on the finances of American families. Yet, amidst the hardship, communities took care of their own without any help or incentive from the government. People helped other people because it was the correct thing to do. 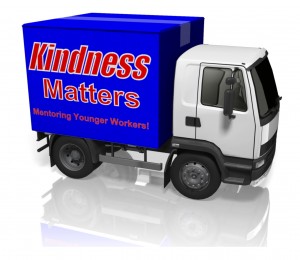 The Feehan family’s benevolence, during the great depression, was remembered and appreciated among future generations of customers and it has paid dividends towards Feehan Plumbing’s reputation and success. Feehan believes that he is the benefactor of his grandfather and father’s generosity and he mentors his employees to uphold this legacy with technical excellence and personal service.

“It comes down to the basics,” Feehan explains. “I have taught my employees that arriving 10 minutes early is being on time.”

Feehan’s lesson about arriving early and respecting a customer’s time is a key differentiator among service companies.

This is evidenced by the numerous company owners with whom I have inculcated the discipline of making pre-arrival and post-arrival phone calls. These company owners who begin this discipline tell me that their customers are pleasantly shocked that a service company made the time and effort to call. Why? Because these customers are rarely on the receiving end of proactive service.

The Feehan family’s benevolence, during the great depression, was remembered and appreciated among future generations of customers and it has paid dividends towards Feehan Plumbing’s reputation and success.

Practicing good follow up and respecting a customer’s time costs pennies, yet most service companies still don’t get it.

Feehan does get it and he mentors his employees to deliver exceptional service. 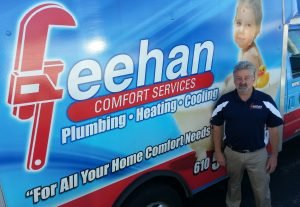 Tommy Feehan alongside one of his trucks.

Mentoring today’s younger workforce in soft skills behaviors such as respect and generosity may stand in stark contrast to today’s cultural narcissism found among social media outlets. In times when younger folks may believe, “It’s all about me.”, there still exists enough seasoned professionals who care to instill the benefits of putting the needs of others ahead of your own.

According to the Pew Internet Project Social Networking Fact Sheet, 90% of adults in the 18 to 29 age bracket use social media.

In my humble opinion, Facebook is the most pervasive force in promoting the “It’s all about me.” narcissism which has permeated numerous aspects of our culture. Among all adult social media users, 71% frequent Facebook compared to only 22% who use LinkedIn, which is a business-oriented social media site. No doubt that Facebook has changed our social and cultural fabric.

Our industry’s mature business professionals can help to balance and offset today’s computer-savvy culture by mentoring the younger workforce in improving their personal, face-to-face customer encounters. A pleasant smile, a benevolent attitude and going the extra mile for a customer adds that extra finesse.

One may ask, “Who notices when I help others?” and the answer is that it doesn’t matter who sees you do a good deed. Helping others should be done because it’s the correct thing to do regardless of whether anyone takes notice.

It’s not about you.

Yes, service companies seek profit and the mutually beneficial customer relationship. Feehan’s history and experience in serving the community are a reminder that we’re all connected and that generosity eventually rewards those who seek the greater good.