Were you ever served by Call Center Vampires over the phone?

I once called my local telephone carrier about my unresolved situation. I had arranged for a change in my telephone service which was supposed to have happened on the previous week.  It didn’t happen.

So on a Monday morning I phoned them.

I will refrain from mentioning the name of the telephone carrier. Let’s just say it rhymes with horizon and borrows a letter from the word vampire.

And while real vampires do not exist, this experience taught me that service vampires do.  My hope was being sucked dry by apathetic employees who drain the optimism from their victims. Their anemic and perfunctory demeanor became evident after two hours and 13 minutes of excruciatingly bad service.

And while real vampires do not exist, this experience taught me that service vampires do.

During the first 20 minutes of my phone call I spoke to three different employees. It was during these conversations that I learned my previous week’s order was more complex than anticipated. With this new found knowledge I was transferred to a fourth employee with the assurance of “I am transferring you to someone who can help.”

The fourth employee asked for all of the same information that I had given to the first three and so began the same qualification and diagnosis only to receive a report that the previous week’s order was more complex than anticipated. 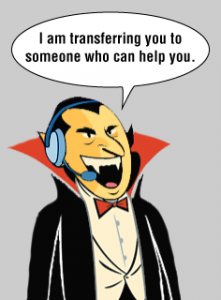 This prompted a fifth transfer to an employee who reviewed my account and all my current phone services and asked how she might help me. “Do you know anything about my situation?” I asked. Her negative reply along with an explanation that I was in the wrong department prompted a sixth transfer to a supervisor with the assurance of “I am transferring you to someone who can help.”

A supervisor listened to the first 10 seconds of my issue and then, without a word transferred me to number seven. “Did your supervisor explain my situation?” I asked. Number seven knew nothing but she listened carefully and came to the same conclusion as number three. Specifically that my order was complex. “Can you help me?” I asked.

She assured me that I was being transferred to a person who would be able to help. So after more than an hour of being transferred to seven employees, I assessed that the promised assurance of future help with a transfer to another employee had been inculcated as a service placebo.

Employees number eight through 13 did more of the same until I finally spoke with Lisa – number fourteen. I heard something different in Lisa’s voice – it was a sense of certainty, authority and integrity. Lisa assured me that she would fix things. That is exactly what she did.

A placebo is a neutral preparation prescribed for psychological affect only. In customer service terms a service placebo is used to placate a customer.

Lisa explained in very clear terms why the previous week’s change did not happen. I learned that resolving the problem required a Field Technician to perform a quick on-site cable adjustment which Lisa scheduled and which happened that week.

Lisa even followed up after a few days to ensure that things were working.

An event like this can happen to any busy call center. Mondays are a challenging day and service placebos only make things worse.

Remember vampires may not be real but clients are and it is the customer service person who must keep the customer happy. Customers appreciate the truth even if the resolution takes a few days.